82% of fathers say they could have used more emotional support during pandemic — 68% of mothers say the same: study 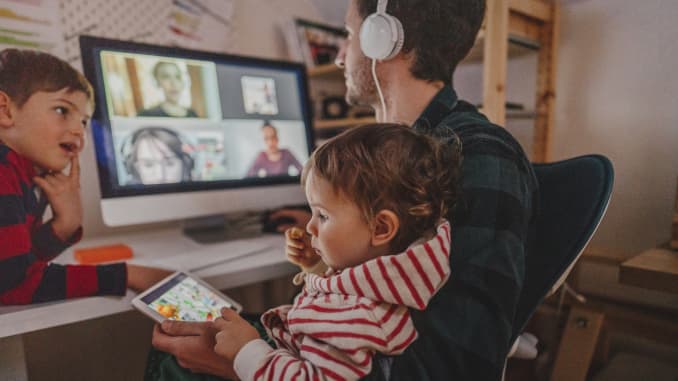 Parents could use some extra support during the pandemic, both emotional and logistical.

But fathers are significantly more likely to say they need emotional support throughout the pandemic than mothers, according to a new survey from the American Psychological Association.

Overall, 75% of parents with kids under age 18 said they could’ve used more emotional support, which includes having a friend, family member or mental health professional that you can go to when you have concerns or are upset, according to the APA’s “Stress in America” report published Thursday.

More specifically, 82% of fathers said they needed more support than they were given since the pandemic started, while only 68% of mothers surveyed said the same thing.

So, what’s with this discrepancy?

For starters, lots of research has shown that men tend to have smaller social support networks than women, Dr. Lynn Bufka, APA’s senior director of practice transformation and quality, tells CNBC Make It.

“A lot of men’s social support and social connections just generally tend to come from work and their partners,” Bufka says.

With many people working remotely during the pandemic, there are fewer opportunities to interact with friends in the workplace.

Women are also less available for their partners during this time, because data suggests that women have assumed more responsibilities during the pandemic, Bufka says.

In fact, a recent study of 31,141 people from five countries found that women, especially mothers, spent more time on “necessities” like childcare and household chores during the pandemic than men.

Part of this has to do with the way that men and women are socialized to divide up “inside and outside” household roles, Bufka says. Other literature has shown that the person in a couple who is perceived to have the more flexible job tends to assume more responsibilities, she says. (It’s not clear how many of the 3,000 American adults included in the APA survey, which was conducted in mid-February, are in same-sex couples or heterosexual ones.)

“When you put that together, you’ve got men, who have been more likely to rely on their female partner, who has now taken on a lot more responsibilities during the pandemic,” Bufka says. “And men have less access to sources of support through work.”

A separate survey published in December found that working mothers are 28% more likely to experience burnout than fathers.

Ultimately, being spread too thin comes with real-life consequences. With childcare and schools closed due to the pandemic, many women have been forced to leave jobs due to increased demands at home. The total number of women who have left the labor force since the start of the pandemic reached over 2.3 million in January.

Bufka encourages people who are in a position to help (perhaps those who don’t have young children at home) to offer a hand to parents.

“Recognize that the people who have young kids who might be struggling, maybe don’t necessarily know that you’re available to play outside with the kids for a little bit,” she says.

For people with children, “really think through: Is there someone who can give us some support? What would that look like? What would really make a difference?” she suggests.

Have questions about an article, content to contribute, or a comment/suggestion for this page? Please contact us.